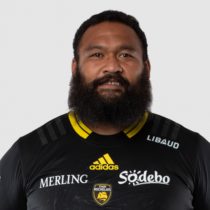 Born in Timaru, NZ, to Samoan parents, Atonio attended Wesley College where he played for the first team. After school he was invited to join Counties Manukau Rugby Academy.

Although being born in New Zealand, Atonio chose to play for Samoa in the 2009 Junior World Cup

La Rochelle recruited the young prop in 2011, and was eligible to play for France after staying in the country for over 3 years. In 2014 he got his International call up and played 3 Tests that year.

Early in 2015, he was selected for the French 6 Nations Squad, making four appearances from the bench.

Used primarily as an impact sub by the French national team, Atonio has become known on the international scene as an incredibly explosive carrier in the loose. Solid in the scrum, Atonio was selected in the final 31-man squad to represent France in the 2015 World Cup.

He made just one appearance starting at No.3 against Romania at London's Olympic Stadium.

Atonio then made his 6 Nations debut off the bench against Scotland in the first round 2015 and missed just one game in the tournament against Italy in 2015 round 4.

In June 2016, he was called into the French national team to prepare for the 2016 November Tests.

Atonio was then included in the France squad to tour South Africa for a three-match series, at the time the front-rower had represented France 25 times.

He went into the 2019 Six Nations squad with 14 previous appearances in the tournament.

The New Zealand-born prop was called up to replace injured Wilfrid Hounkpatin ahead of the team's 2020 Six Nations opener against England.

As of September 2020, he has made 210 appearances for La Rochelle and has scored 45 points.