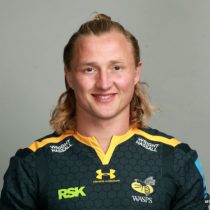 Born in Macclesfield, England, in November of 1991, Taylor plies his trade as a dynamic hooker. More than efficient in the tight and industrious in the loose, Taylor is your archetypal modern hooker, more than capable in the wide channels.

His professional career began in 2011, signed his first contract with Sale Sharks, he followed in his father footsteps into the first team where he went on to make 106 appearances.

Eddie Jones named Taylor in his England squad in May 2016 where he made his full debut against Wales later that month.

After joining Wasps in 2016, Taylor enjoyed a brilliant first season making 26 appearances and scoring four tries as his club reached the Premiership final.

He reached the 50-appearance milestone for the Club at the beginning of the 2019/20 season.