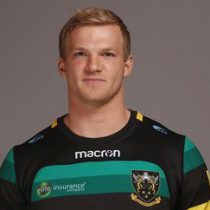 One of the most exciting prospects to advance from the Saints Academy, Tom has already had a considerable impact at Franklin's Gardens Playing a year above age for England U18s, Stephenson not only captained the side, but played a vital role in ensuring they returned home from the FIRA/AER tournament in Madrid as champions.

Stephenson has a blend of pace and power that has proved almost impossible to stop at junior level and also now at senior level.

He made his first senior appearance for Northampton Saints in 2012 and became a staple member of the senior team for the 2013/14 and 2014/15 seasons.

The 2013/14 saw Stephenson come of the bench in both the European Rugby Challenge Cup final and the Premiership final.

Having already travelled with England Under-20s in 2012/13, Stephenson then went to New Zealand, picking up a Junior World Championship winners' medal for the second year on the bounce.

His run in the senior team was marred by injuries, with him only featuring two games for Saints in 2015/16 due to injury and sat out the entire 2016/17 season after a double leg break during a pre-season friendly against Rotherham Titans.

In March 2018, it was confirmed that Stephenson would be leaving his childhood club Northampton Saints after 5 years to join London Irish.