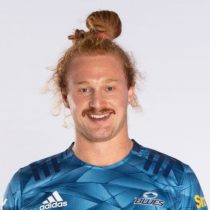 A young powerful foward who has been making waves at the Northland Taniwha. The big man with a quick turn of pace who is comfortable at lock or as a loose forward.

Hailing from Kerikeri High School in the far north of New Zealand, Tom played his debut season for Northland in 2016. An unfortunate knee injury ruled him out of rugby for the entirety of the 2017 Mitre 10 Cup season.

After displaying incredible resilience and professionalism, Tom made his return from injury for the Taniwha in 2018. His work rate and natural instinct in space were put on show in some eye catching performances as the Taniwha made their second consecutive finals series appearance in the Championship division of the Mitre 10 Cup.

His performances drew the interest of the Blues who signed him on for the 2019 Super Rugby season.

Tom made his debut for the Blues on the blindside of the scrum against the Crusaders in the opening round of the 2019 Super Rugby season.

Robinson was a revelation for the Blues, bringing a grittiness to the forward pack which resonated with Blues fans.

He quickly become a cult hero for the Blues while amassing 15 caps in his rookie season.