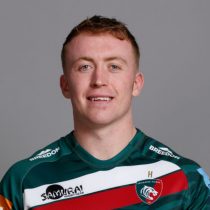 Captain of Wales Under-18s in 2017, flanker Tommy Reffell moved up an age-group to lead the national under-20s during their Six Nations campaign in 2018.

Coming through the academy ranks at Tigers, he made his senior team debut in an Anglo-Welsh Cup defeat at Bath in November 2017.

In May 2018, he was named captain of the Wales U20s team that would compete at the 2018 World Rugby U20s Championships.

Reffell was included in Wales U20 Six Nations squad in 2019. A captain of Wales Under-18s and Under-20s, flanker Tommy Reffell earned promotion to the senior squad at Leicester Tigers in 2019/20.

After six senior appearances for Tigers in 2018/19, Tommy played every minute of a second World Championships with Wales in Argentina in the summer before returning to senior company at club level.

The Flanker has since become a regular in the Tigers senior squad making 21 appearances for the club during the 2019-20 season.