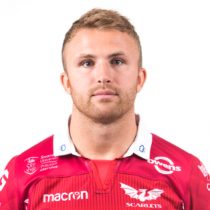 Tom Prydie broke onto the scene for the Ospreys at the age of 17 years and 292 days. That came as a second-half replacement in their Heineken Cup match against Viadana in December 2009, an appearance that made him the youngest player in Heineken Cup history.

Tom was named in Danny Wilson’s Wales Under 20 squad for the 2012 Junior World Championships in South Africa. He made his debut for the Under 20s in May 2012 against Japan at St Helens where he scored 5 tries in the one game.

Prydie holds the record as the youngest Wales international, making his debut against Italy in 2010 when he was 18 years and 25 days old. Prydie has won five caps, but his last appearance was against Japan in 2013.

Tom was on loan with London Wasps for the second half of the 2011/2012 season, making 7 appearances for the Premiership side.

Prydie was named in the Wales squad for the 2018 June Tests and heads into the test window with 7 tests caps.