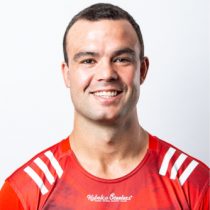 Tom Franklin is a promising lock who was a member of the New Zealand U20 team that won the 2010 Junior World Championship in Argentina.

Having grown immensely since his ITM Cup team debut for Otago against Counties Manukau in 2011, Franklin was named in the Highlanders' squad for the 2014 Super Rugby season, debuting against the Lions in Dunedin and earning eight caps for the year.

After the 2014 ITM Cup campaign where Franklin played an average of 75 minutes over 10 games, he was rewarded with being selected in the 2014 Maori All Blacks team that toured Japan. He followed that up with a strong 2015 season playing every game up until round 17 where an elbow injury ended his season.

In June 2017 Franklin was named in the New Zealand Maori side to face the British and Irish Lions and played a full 80 minutes against the side.

Franklin helped the Highlanders reach the Super Rugby quarter-final where they were knocked out by the eventual champion Crusaders.

He played in all of the Highlanders Super Rugby matches and finished the season with 54 Super Rugby appearances for his side and has scored 1 try.

Franklin will represent Bay of Plenty in the 2017 Mitre 10 Cup having signed from his former side Otago.

Franklin was once again named in the Maori All Blacks squad and started both their end of year tour matches against Canada and the French Barbarians.

In April the Highlanders announced that Franklin will join Kobe Steelers during the Super Rugby offseason, which means he will be available to the Landers for the 2019 season.

Franklin was called into the All Blacks squad as injury cover ahead of the June Tests. He didn't make his test debut and finished the 2018 Super Rugby season with 66 caps.

The second rower left New Zealand to join Kobe Kobelco Steelers and has since taken over the captaincy at the club.