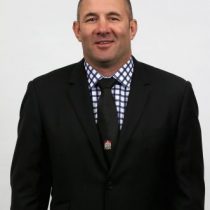 The former loose forward has been an integral part of the Chiefs during their most successful times having won two Super Rugby titles. Coventry has also been involved with the Samoan squad as Co-Head Coach, a role he has held since 2011.

Waikato born and raised, Coventry played 52 games for Waikato between 1988 and 1994, scoring 14 tries and winning the NPC in 1992 before his coaching career began with Otago University.

Tom’s coaching career includes, amongst others, roles with New Zealand Schools, New Zealand U20s and four years as Co-Head Coach of Hawke’s Bay where he won the ITM Cup, and 4 years at The Chiefs as assistant coach to Dave Rennie, where they won two Super Rugby Championships.

In January 2015, Coventry was appointed as London Irish Head Coach but resigned a year later for 'family reasons. November 2016 saw him being appointed as Head Coach of North Harbour for the 2017 Mitre 10 Cup.

After a successful start to his time as the North Harbour, helping them gain promotion to the Premiership and a playoff spot the following year, he signed on as a Blues assistant coach for the 2019 season.