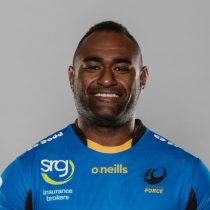 A superstar from the moment he made the step up to professional rugby. Tevita Kuridrani has shone in both the Brumbies and Wallabies' jerseys over the years.

Kuridrani is gifted with extra-long legs allowing him to glide past would-be defenders while a deadly fend and subtle left-foot step are enough to keep the best of defenders second-guessing while also possessing an excellent ability to offload.

After representing Fiji at Under 20’s level in 2010, Kuridrani switched his allegiances to his adopted country of Australia the following year. He made his Australian Sevens debut in Dubai later in 2010, travelling the globe with the shortened version’s representative team until the end of 2011.

Kuridrani was part of the Reds Academy but was snapped up by then Brumbies head coach Jake White ahead of the 2012 Super Rugby season. From the first glimpses Brumbies fans were treated to of Kuridrani during the trial game against the Force in Darwin, the Fijian native has not failed to live up to his hype, cutting through opposition defensive lines.

In 2012, he made his Super Rugby debut for the Brumbies against the Reds off the bench in Brisbane and by his second season at the Brumbies, Kuridrani had established himself as the team's first-choice centre, and he was a member of the starting side for the Brumbies which defeated the British and Irish Lions in 2013.

His form at Super Rugby level did not go unnoticed as he was called up to the Wallabies squad after leading the Brumbies to the Super Rugby final in 2013. Ewen McKenzie handed the exciting centre his first test cap off the bench against the All Blacks in 2013 with his first test start coming a month later against the Springboks at Newlands.

He has since become an established player at national level and has gone to two Rugby World Cups with the Wallabies and started the final against the All Blacks in 2015. He earned his 50th cap for the Wallabies against South Africa during the 2017 Rugby Championship and has also accumulated over 100 Super Rugby caps for the Brumbies.

Ahead of the 2019 Super Rugby playoffs, Kuridrani extended his deal with the Brumbies until the end of 2020. He entered the 2020 season with 121 Super Rugby caps and has scored 28 tries while he also took his test cap tally to 61 at the Rugby World Cup in Japan scoring 22 tries.

In September 2020, he traded the Brumbies for the Western Force, following 135 caps and 28 tries scored for the Canberra side.