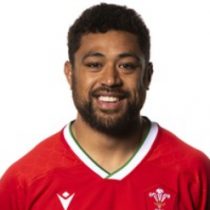 Originally born in Tonga, Faletau moved to Wales with his father, Tongan international Kuli Faletau, in 1998 as a 7-year-old boy.

Faletau broke onto the international stage at the 2011 Rugby World Cup with some stellar performances which earned him widespread praise amongst critics who initially claimed the Newport-Gwent Dragon was too inexperienced.

His dynamic ball carrying and offensive defence has seen him establish himself as Wales' frontline number 8. On the back of Wales' grand slam season in 2013, Faletau was included in the British & Irish Lions touring party. Few could argue that Faletau had been the form 8 in the Northern Hemisphere for months leading up to the tour. His carrying in open field was been outstanding and this, allied with a steeliness in defence, saw the giant Welsh back-rower selected to start the third and final test against the Australians.

The big No. 8 was called up to represent his country once again for the 2015 RWC at the back of 97 matches for the Newport Gwent Dragons and 48 caps for Wales.

In December 2015, Bath announced they had signed Faletau after a long pursuit which lasted months.

The British and Irish Lion moved to the West Country from Newport Gwent Dragons, the Welsh region for whom he made his professional debut in 2009.

Faletau missed three of Wales' autumn Tests after suffering a knee injury on his Aviva Premiership debut two months earlier. He was laid low by a knee problem picked up during Bath's game against Wasps on Christmas Eve, putting a question mark over his early Six Nations prospects.

In April 2017, Faletau was selected for his second British & Irish Lions tour and at the time of selection, had 66 Welsh caps and 7 Lions caps (1 test.).

He started all three of the Lions test matches against the All Blacks and all 4 of Wales November Tests.

In January he was named in Wales 6 Nations squad but missed the opening two fixtures through injury, he entered the competition having already featured in 70 Test matches for Wales.

Faletau missed Wales' Six Nations Grand Slam in 2019 through injury and was unable to add to his 76 test (4 with the Lions) before he was ruled out of the Rugby World Cup in Japan after sustaining a clavicle injury.

He returned to Wales' squad ahead of the 2020 Six Nations having made his return to fitness with Bath.

In May 2021, Faletau was selected for the 2021 British and Irish Lions, it will be his first to South Africa with the side and this will be his third tour overall.