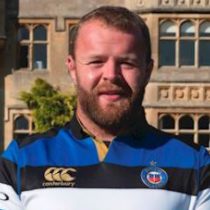 The former Wales’ under 16, 18, and 20 player made his senior Cardiff debut in 2009, in an away league game against Ulster. Andrews has captained Wales at under 20 level in the 2009 under 20 Six Nations game versus France and Italy. The prop has also represented Glamorgan Wanderers and Y Pant Comprehensive School.

In 2011 he made his international debut in a summer fixture against the Barbarians and was involved with the Welsh team that won the 2013 Six Nations Championship for a second year in a row. He has been a regular in the Welsh setup since 2013 and has earned himself 11 caps thus far.

Andrews was part of the Wales set-up during the Six Nations in 2014 and 2015 before hitting a major milestone in September 2015 when he played his 100th game for Cardiff Blues when the region faced Ulster Rugby.

He was selected into the Wales 2017 Six Nations squad. He has represented Wales on 14 occasions, 3 of which in Six Nations.

In September Andrews joined Bath on a short term contract, representing them in the Premiership and Champions Cup.

He went into the 2018/19 season having represented Cardiff Blues on 150 occasions, scoring 15 points.

As of May 2020, he has made 182 appearances for the Cardiff Arms Park side and has scored 15 points.