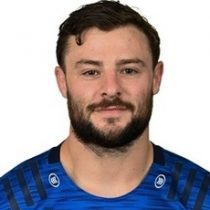 Hailing from Athlone, Ireland, Henshaw forged a name for himself as a rising star in the Irish game courtesy of several assured performances in both Pro12 and Heineken Cup.

A fullback by trade, Henshaw made his debut for Irish province Connacht in the Pro12 on September 1st against the Cardiff Blues. Months later and he had earned himself a call up to the national training squad for the Six Nations, having previously represented Ireland at Schools, Under 18 and Under 19 levels.

Since then Henshaw has made the 12 jersey his own, forming a successful partnership with Jared Payne in the centre for Ireland. The young Irishman was selected to represent his country at the 2015 Rugby World Cup, following an excellent 2015 Six Nations campaign, where he recorded his first test try.

Henshaw won the 2015/2016 Pro 12 with Connacht following a magical season with the province. In February 2016, Robbie announced that he would be joining Leinster on a 3-year contract that would end after the 2019 RWC in Japan.

He began the 16/17 campaign in fine style for his new province, striking up an exciting centre partnership with Garry Ringrose in his opening games for Leinster. This combination looks certain to become a permanent fixture in the Irish midfield for years to come. Henshaw made one of his most famous appearances in the famous victory over New Zealand in Chicago, going over for the last try to clinch the game.

In April 2017, Henshaw was named as one of the 41-man squad to travel with the British and Irish Lions to NZ, his first tour.

He helped Leinster win the Champions Cup and PRO14 title during the 2017/18 season and featured in all 3 of Ireland's tests against Australia in June taking his test cap tally to 36.

In February 2019, Henshaw extended his IRFU contract which will see him play his rugby at Leinster up to at least the end of June 2022. Following the Six Nations, he was named in the RWC Training Squad. He had 40 Ireland Caps as of November 2019.

He went into the 2019 Champions Cup with 21 appearances in the tournament and 30 points scored.

Henshaw was named for the 2020 Six Nations Ireland squad and has 40 caps.

In May 2021, he gained selection into the British and Irish Lions squad to tour South Africa. Henshaw started all three tests against the Springboks.