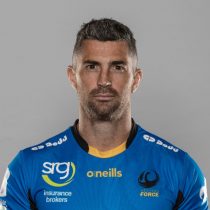 A promising player at school for Clongowes Wood College, the man from the Cooley Peninsula in Louth made his debut for Leinster in 2005 and has represented Ireland at schools, Under 19, A and senior levels.

The Louth native, now aligned with University College Dublin, was a member of Eddie O'Sullivan's 2007 RBS 6 Nations squad but did not earn his first cap until the '07 summer tour to Argentina. He made his RBS 6 Nations debut against Italy in February 2008 and went on to win caps in each of the 5 games, turning in some eye-catching performances.

Kearney also played the two summer tests against New Zealand and Australia. The 08/09 season saw his star continue to rise. His coolness under the high ball, counter-attacking pace and siege gun left boot saw him pick up a Grand Slam and a Heineken Cup winners medal as well as place in Ian McGeechan's 2009 Lions squad.

Played four games in RWC2011 scoring a try against Russia. Kearney has since established himself as one of Ireland's frontline players under the Declan Kidney regime. Kearney's career has progressed well in recent years, culminating in him being recognised as the European Rugby Player of the Year in 2012, the day after his club side Leinster retained their Heineken Cup title.

In 2013, Kearney was once again selected for the British and Irish Lions squad for the tour of Australia. Played in four more at RWC2015 scoring an Irish record-equalling try in three successive RWC games, against Canada, Romania and France and then the persistent problems disrupted his Six Nations campaign.

In 2016, Kearney was ruled out of Ireland's summer tour to South Africa following a hamstring strain. Kearney has been injury-ravaged over the last 18 months, but Joe Schmidt remained his faith in the Leinster full-back and handed Kearney a starting berth against the All Blacks in Soldier Field, Chicago. The Louth man responded with perhaps one of his most threatening performances in an Irish jersey with an all-round display.

Kearney made his Ireland debut against Argentina in June 2007 and has won 95 caps for the national team.

He went into the 2019 Champions Cup with 78 appearances in the tournament and 96 points scored.

The end of the 2019/2020 season marked the final involvement for province and country for Kearney. Ireland’s most decorated rugby player, his list of achievements for Leinster and Ireland is unmatched and includes two Grand Slams in four Six Nations titles, four European titles, six Pro14 medals and a Challenge Cup. He also has a European Player of the Year award in 2012 and two Lions tours.

Leinster and IRUPA Player's Player of the Year Award 2012