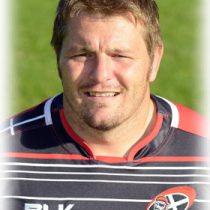 He has performed consistently well as a reliable front rower during his years at the Pirates and has been an integral part of the club's success.

His exemplary work in the tight and superior line out throwing has also made him a hugely popular member of the squad.

Rob joined the Cornish Pirates from Gloucester in the summer of 2007, where with Mefin Davies and Olivier Azam providing opposition for the number two jersey, his first team appearances had been limited.