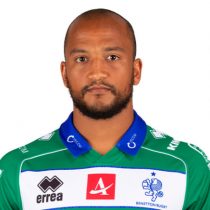 Rhyno Smith is a product Leopards Rugby Union, after impressing in the Varisty Cup with Pukke.

He firmly established himself in the NWU Pukke team for the 2015 Varsity Cup, starting all nine of their matches in 2015.

As in the previous two seasons, Smith started 2016 by playing Varsity Cup rugby for NWU Pukke. He started all nine of their matches, scoring 73 points, the third-highest points total in the competition. After two consecutive final defeats, the NWU Pukke won the Varsity Cup title for the first time after beating Maties 7–6 in the final, with Smith emerging as the match-winner.

Smith was offered a contracted with Durban based side, The Sharks, in which he played Currie Cup for the Sharks in 2016 having already featured for the sides during the 2016 Super Rugby season, where he debuted against the Lions.

In December 2017, it was confirmed that Rhyno will stay with the Sharks until at least 2019 after signing a new deal.

He looks to add to his 8 Super Rugby caps in 2018, after he completes his stint with the South African 7s squad.

In October 2018, Smith joined the Cheetahs on a 5-week loan deal.

July 2019 saw him sign a deal to head back to Bloemfontein with the Cheetahs after previously playing for the team in the PRO14 during the 2018/19 season.

January 2021 saw him sign a three-year deal with Italian side, Benetton Rugby.