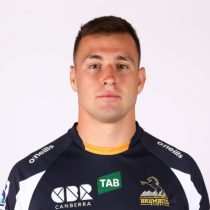 A giant second-rower, Nick Frost was one of the most promising youngsters in World Rugby in 2019. Incredible speed is an asset usually applied to the back three, but the Queanbeyan Whites star has been making strides in this area with his lengthy and rangy running style.

Described by former Wallabies coach Matt Williams as “the most talented 20-year-old lock” he has seen since Australia legend John Eales, Frost has certainly earned his high praise and looks certain to don the Gold Green of the Wallabies.

Frost played rugby with Knox Grammar School in Sydney before going on to represent Australia at schoolboy level. He made the bold call in 2017 to sign with New Zealand Super Rugby franchise, the Crusaders on a three-year deal to take part in their development programme and represented the Canterbury Colts.

He was named in the Junior Wallabies squad for the U20 World Rugby Championship and scored an incredible long-range try as the Australians progressed through to the semi-finals of the competition.

In November 2019, he was named in Brumbies squad ahead of the 2020 Super Rugby season and made his debut off the bench in the win over the Melbourne Rebels.

In May 2021, it was announced that Frost would extend his time with the Brumbies until at least 2022.