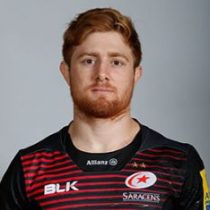 London-born Stirzaker was raised in Australia from the age of two and has played a crucial role for the Rebels since starting his career with the Super Rugby side in 2012.

He captained the Melbourne Rising team to victory in the inaugural National Rugby Championship in 2014 and enjoyed a breakout 2015 season, scoring his first Super Rugby tries and becoming a stalwart in the Rebels team.

Blessed with great speed off the mark, Stirzaker became the quickest player over 20 and 40 metres in the Rebels squad, with his 20 metre record of 2.71 seconds, a time better than the quickest ever time at AFL draft camp.

He also leads the Club in all agility testing, but it’s his service at the ruck that is his strongest attribute, with the careful guidance of former Wallaby and Rebels halfback Sam Cordingley.

He was made captain of the Melbourne Rebels Super-Rugby outfit in 2016 and became the youngest Rebels player to reach 50 appearances in 2017.

Stirzaker has internationally represented the Barbarians, playing for the invitational side in the autumn of 2017 before joining up with Saracens at the end of the year.

In July 2017, Stirzaker signed a one-year extension with the Rebels.

In January 2018, Nic signed for Champions Cup holders Saracens on a three-month deal. Later that month Bristol announced that the English qualified halfback would join the club ahead of the 2018/19 season.