The first of the New Zealand derbies sees the Highlanders pitted against the Chiefs in Queenstown.


The Chiefs announced earlier in the week that their co-captains for the season would take the forms of scrumhalf Brad Weber and flanker Sam Cane.

"I’m really looking forward to leading the team with Sam again this season, he’s a top man that I love working alongside,” Weber said.

“We, along with the rest of the leadership group are ready to lead us to go one better this year.”

“I am really looking forward to the Super Rugby Pacific competition. We have a quality squad and quality coaching group. We have a great mix of experience and exciting young talent and I am honoured to be asked to co-captain the Gallagher Chiefs again with my good mate Brad. It’s a big season ahead and we can’t wait to rip in.”

Coach Clayton McMillan was upbeat about the chances of his side as the new season kicks off.

“It’s great to have seven of our All Blacks starting in Round One and we know a lot of our loyal fans are looking forward to seeing Guzzler [Brodie Retallick] back in a Gallagher Chiefs jersey,” he said.

“We are also looking forward to welcoming three new debutants. It’s a huge privilege to pull on the Gallagher Chiefs jersey and it is a special occasion for them and their whānau. We are excited to see what impact they will have on our season opener.

“A significant amount of effort and adjustments have gone into our pre-season and we are now really excited to rip into our first game of the new season. 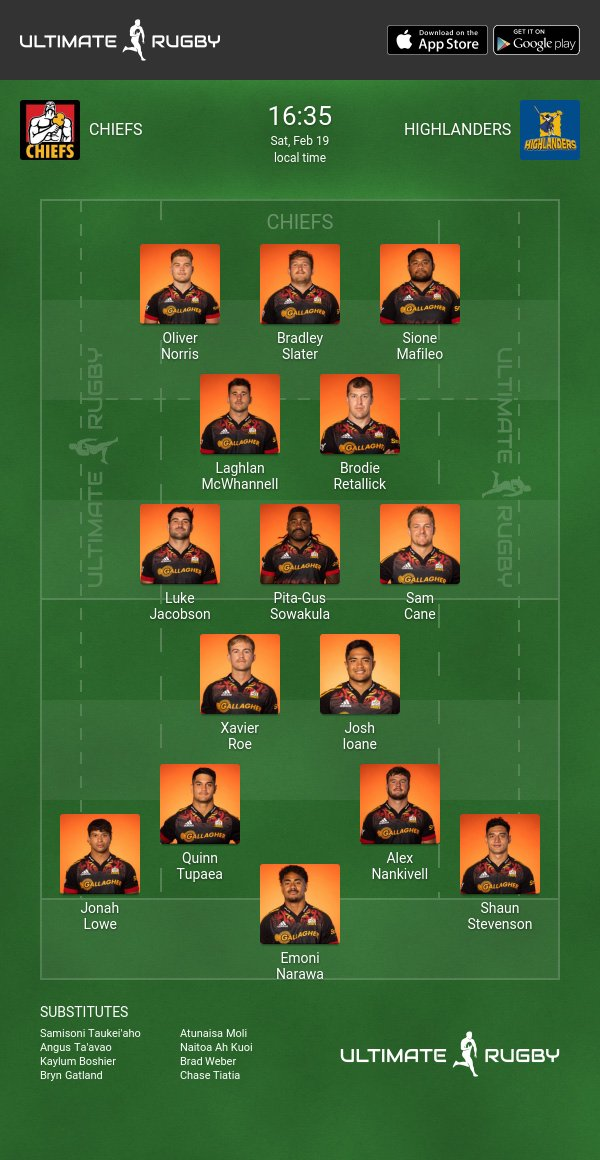 “It’s hugely important to us that our hard work and energy manifests into a performance we can all be proud of. We know a lot of our fanbase are disappointed they cannot attend this Saturday, but we are grateful for the support we have received from our sponsors, members and Chiefs whānau to get us here. We are playing for all of you this Saturday.”

It will be a big night for the Highlanders’ Shannon Frizell who runs out for his 50th cap. Frizell debuted back in 2018 and has contributed significantly to the side ever since.

“Shannon has made an impact on the field from the moment he first arrived here,” said head coach Tony Brown.

“He’s a strong ball carrier and has been one of our most consistent forwards over the last few seasons. His selection for the All Blacks is a well-earned reward for a lot of hard work put in on the training field. No doubt he will be looking forward to running out for his 50th match for a team he cares a lot about.” 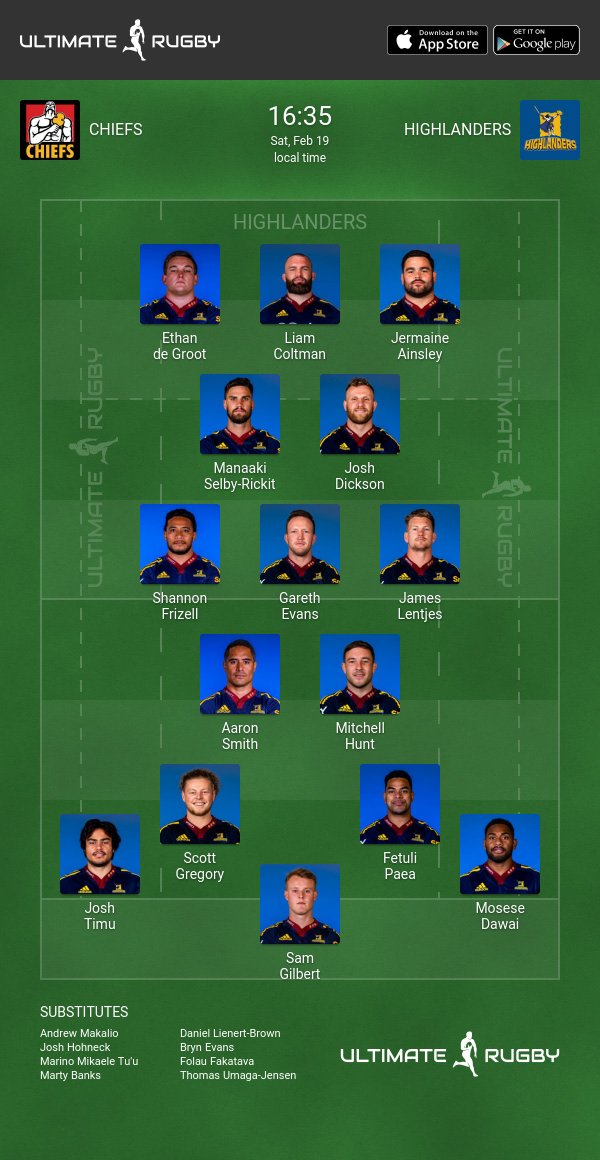 The second of the New Zealand derbies will see the mighty Crusaders take on the Hurricanes in Dunedin.

As always, the Crusaders are expected to be serious title contenders this year but have often found themselves starting a Super Rugby season off on the wrong foot before finding their rhythm. If that trend is to continue this year, the Canes will be eager to exploit it.

However, sticking one on this Crusaders team will take some doing as head coach Scott Robertson has named a formidable outfit which includes 10 All Blacks. 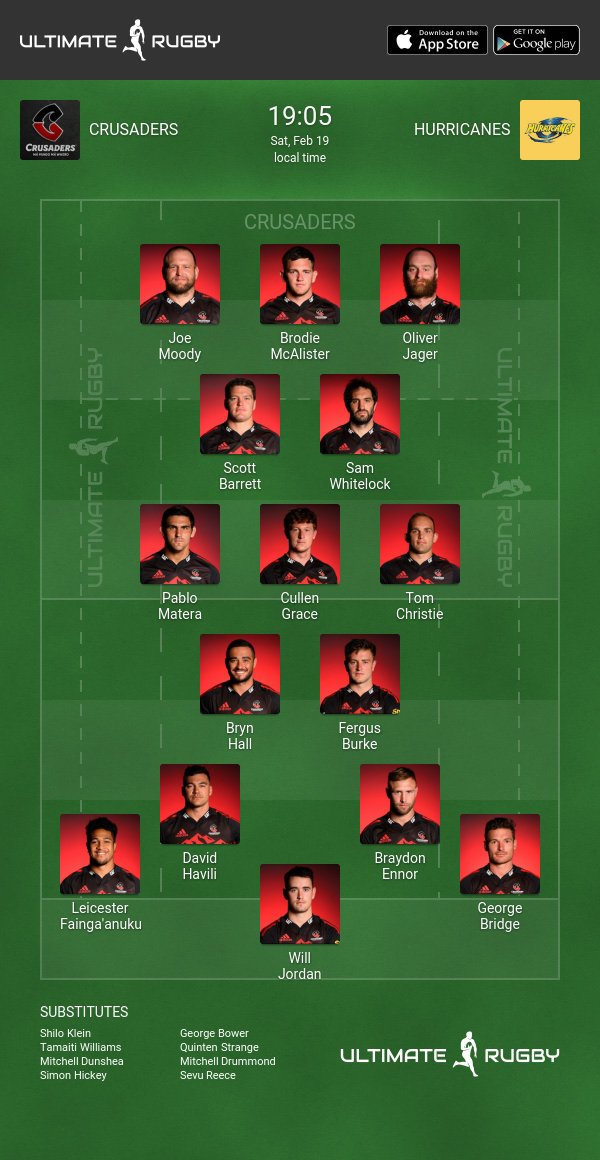 "While we would have loved to be playing at home in front of our fans and families this weekend, we're really grateful to be able to get our 2022 campaign underway and understand just how much work has gone into getting the competition off the ground in Queenstown and Dunedin," Robertson said.

"It's an exciting week for the likes of Fergus Burke and our three debutants in particular. They've all worked extremely hard and prepared diligently for their opportunity and we look forward to seeing them step up on Saturday night."

Hurricanes boss Tom Holland has named a team which is sure to make this game a big contest with a powerful pack and dangerous backline. 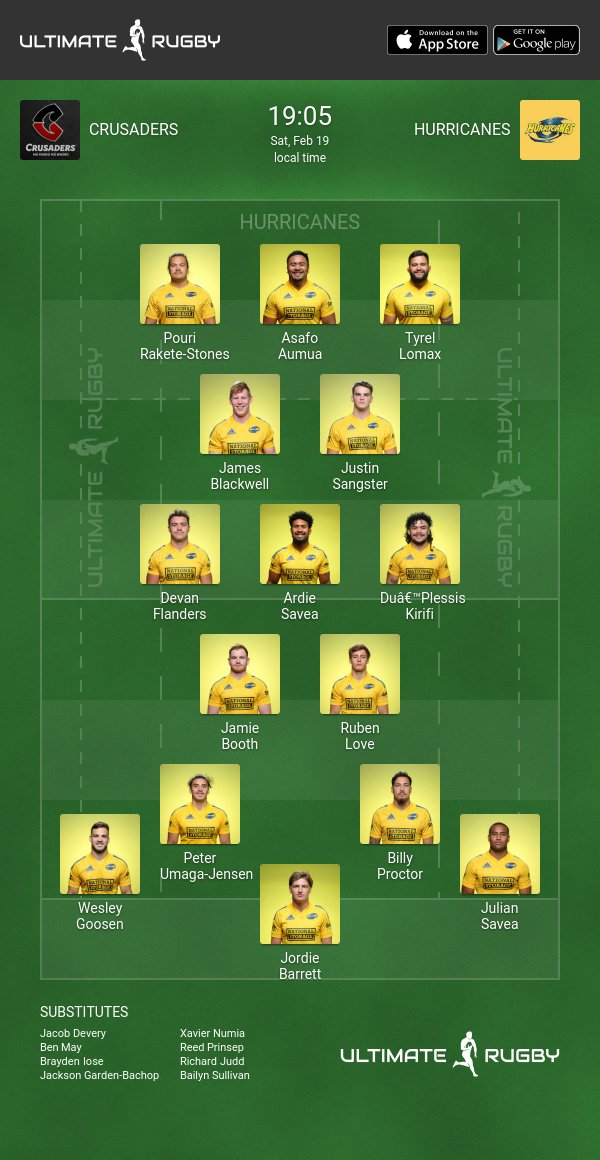 The squad includes three debutants in Justin Sangster, Jacob Devery and Bailyn Sullivan. Also, significantly, Ben May is set to win his 100th cap for the Canes.

“Up front in the locks, Sangster has had a really impressive preseason. He’s been really physical, so I’m looking forward to seeing his debut,” Holland said.

“The other notable selection in the forwards is Ben May. He’s really earned his 100th game this weekend, and I don’t mean the 99 before. I mean, he’s really worked hard over preseason to cement that spot.

Regarding the introduction of Bailyn Sullivan, Holland said:

“It’s always tough coming into a new environment, but he [Bailyn] has embraced it, and earned the boys respect pretty quickly. He’s been training and playing well. He adds another dimension to our attack.”