There is a raft of talented players outside the first tier of test playing nations, some of which could claim to be the best in the position in world rugby.

We take a look at what a potential World XV of Tier Two players would look like.

Georgia's captain at the Rugby World Cup in Japan, Nariashvili is one of the finest scrummagers in the game and it was always going to be difficult to select a World Tier Two without a Georgian in the front row.

Nariashvili still plys his trade in the TOP14 with Montpellier and besides being one of the best technical looseheads in the world, he is a strong ball carrier and an excellent defender.

He beats Japan's impressive Keita Inagaki to the loosehead role with all the Pacific Island teams having at least one loosehead who could rival the pair for a spot in the side.

Shota Horie and German Kessler shot up the Rugby World Cup with outstanding performances while Georgia have two excellent hookers in Shalva Mamukashvili but our pick goes to the USA's superstar Joe Taufete'e.

Lyon bound ahead of the start of the 2020/21 TOP14 season, Taufete'e has an incredible try scoring record for a hooker dotting down 20 times in 27 tests and already holds the record for the most tries by a hooker in test rugby history.

Taufete'e certainly doesn't just walk into the side with the tough competition but does have the edge over the above mentioned with Shota Horie coming in a close second.

Another close call for the jersey. Tonga's Ben Tameifuna is a truly frightening opponent to front up against while Georgian have two World class tightheads in Beka Gigashvili and Levan Chilachava.

The Americans have another world-class front-rower in Titi Lamositi but our choice goes to the man who made his test debut just before the Rugby World Cup.

Mike Alaalatoa won three Super Rugby titles for the Crusaders becoming an integral part of their pack in doing so before debuting against Australia.

Brother of Wallaby Allan Alaalatoa, Mike turned down the opportunity of qualifying for the All Blacks or representing the Wallabies to represent Samoa. An exceptional scrummager,  Alaalatoa is also a skilful and mobile tighthead.

It really could only be one man. Nakarawa is easily one of the best second rowers in the game.

A freak of nature, Nakarawa is a master of the offload and is a talented runner and a hard worker around the park. Jame Moore was outstanding for Japan at the Rugby World Cup in Japan while Fiji have a few candidates that could easily alongside Nakawara in Tevita Cavubati and Semi Kunatani but we have gone for the exceptional Samoan and Bristol Bears' Chris Vui.

Another hard-working second-rower, who can easily play on the side of the scrum, Vui is sublime around the pitch and is one of Samoa's best.

Another player who is one of the best in his position in the world, Michael Leitch inspired Japan to new heights in 2019 but his leadership is far from his only world class attribute.

He is outstanding in all facets of the game and is more than deserving of the blindside role despite stiff competition from the likes of Uruguay's Juan Manuel Gaminara, Fiji's Dominiko Waqaniburotu and USA's Tony Lamborn. 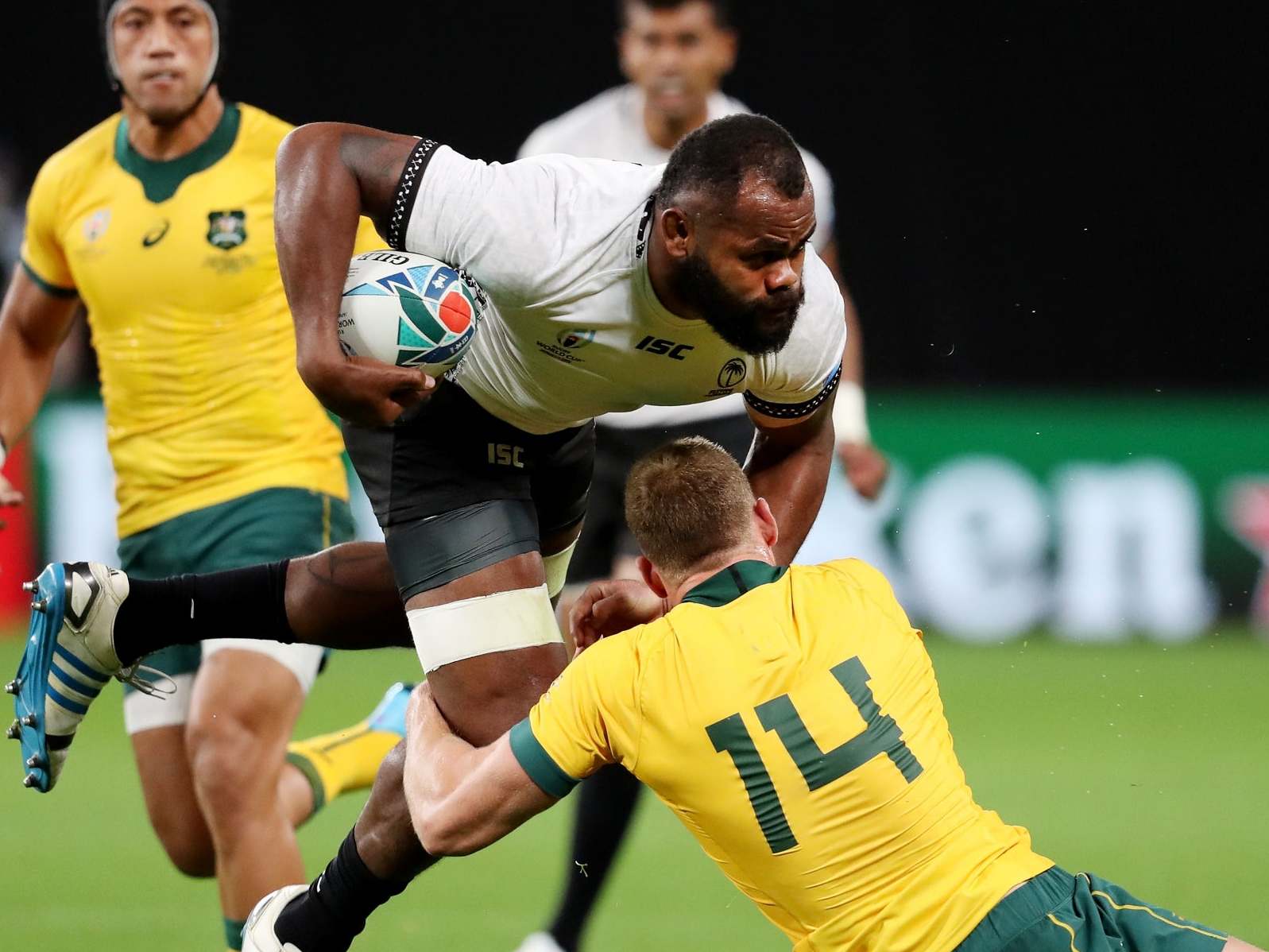 Another supreme athlete from Fiji with Peceli Yato grabbing the 7 jersey in our team. The Clermont loose forward put in an outstanding performance against Australia during the World Cup but followers of Clermont will no that performances like that are somewhat of a norm for Yato.

While Yato claims the #7 jersey in our team, there are notable mentions for Russia's Tagir Gadzhiev and Japan's Lappies Labuschange.

Another hero during Japan's Rugby World Cup, Kazuki Himeno is a superstar back rower and certainly made our decision difficult with the likes of Bill Mata, Ma'a Vaipulu, Amfaesetiti Amosa and even his own teammate Amanaki Mafi in the running.

However, Himeno gets the nod with his ability to do it all on the pitch. He is a solid option at the lineout, an excellent ball carrier, furious defender and a superb pilfer at the breakdown.

A name many have never heard before the Rugby World Cup but one that will be more well known in years to come.

At 23, Arata is a bright prospect for Uruguay and will be key cog in their success for year's to come. The talented Uruguayan edges the likes of Fiji's Frank Lomani, Japan's Yutaka Nagare, Georgia's Vasil Lobzhanidze and Tonga's Tane Takulua.

The nippy halfback will be in the limelight more having signed with TOP14 club Castres.

A troubled position for a number of Tier 2 test teams but there are still a number of classy flyhalves in the Tier 2 game in the likes of Fiji's Ben Volavola, Georgia's young prospect Tedo Abzhandadze and Uruguay's Felipe Berchesi.

However, we have gone with the outstanding AJ MacGinty who could easily play for a number of Tier 1 test sides.

MacGinty is gifted with a brilliant tactical game, an excellent boot and wonderful running game.

An electric runner with a stellar side step and a nose for the try line, Leiua is one of the most dangerous backs in the game whether he is playing at centre or on the wing.

With Siale Puitau having called time on his test career there were two standouts for the inside centre role.

USA's Paul Lasike has made somewhat of a strong transition into rugby but he loses out to the magnificent Levani Botia who can even play in the back row.

Botia is a wrecking ball of a runner and is superb at the breakdown and has a superb offloading game. Another player who could make a strong claim of being the best player in his position and that's whether he is playing in the centres or on the wing.

He beats the exceptional Georgian Davit Kacharava to a place in the side. A wonderful runner, offloaded and match-winner, Radradra is a joy to watch.

The wrecking ball Fijian Josua Tuisova is incredibly unlucky to miss out to the Clermont bound Kotaro Matsushima.

Both players have an incredible knack for scoring tries but we have gone with the silky footwork of Matsushima over the brutality of Tuisova.

A close call but the Japanese flyer just just gets the edge.

A fullback gifted with incredible footwork and speed, Telusa Veainu is a sensational fullback who can break a game wide open at any given moment.

A mention for the likes of Russia's Vasil Artemyev, Samoa's Tim Nanai Williams and Fiji's Kini Murimurivalu but Veainu was just too good to leave out.