Next In Line? The Race For The All Black Second Row

Ian Foster begins his tenure as the new All Blacks' head coach with just 28% of the players in New Zealand saying that the long-term All Blacks assistant coach had been the right choice to replace Steve Hansen in the hot seat.

Taking over the top job for one of the most pressured jobs in International rugby is one thing but having to convince almost half, 46%, of the Super Rugby players in New Zealand that he is, in fact, the right man for the job at the same time is something else entirely.

Foster is well and truly up against when test rugby finally resumes and he selects his first test squads and while there are a number of world-class players in the land of the long white cloud that pretty much select themselves, there are a number of selection headaches he will need to treat.

One of which is how he will plug the gap in the All Blacks' second row. During Steve Hansen's tenure as the All Blacks' head coach, Sam Whitelock and Brodie Retallick dominated the starting jumpers for New Zealand breaking Ian Jones and Robin Brooke's record for the most tests as an All Black test starting combination. However, Foster begins his tenure with one link missing from the locking pair with Brodie Retallick on a sabbatical in Japan until 2021.

There are also signs that 31-year-old test centurian, Sam Whitelocks' day in a black jumper are numbered with Foster opting to hand the captaincy to Sam Cane over the veteran second-rower who led the Crusaders to three back-to-back Super Rugby titles. While Scott Barrett has been pushing for a starting role and has been used to plug the void when either of the two players is unavailable, the current Crusaders' captain has been ruled out for the remainder of the year through injury.

So where does that leave the All Blacks in terms of locks for 2020?

Luke Romano, Patrick Tuipulotu and Sam Whitelock are the only three second rowers in Super Rugby Aotearoa with test experience that would be available to Foster. The new All Black coach could also temporarily move a blindside into the second row with in-form blindside Shannon Frizell capable of playing in the second row as too is Vaea Fifita. Romano regularly makes an excellent impact off the bench for the Crusaders and although it is unlikely, he could do the same for the All Blacks but has been in test wilderness since 2017.

Tuipulotu looks the most likely to get the starting role alongside Whitelock, at least in the short term with a test debutant likely getting their first shot. 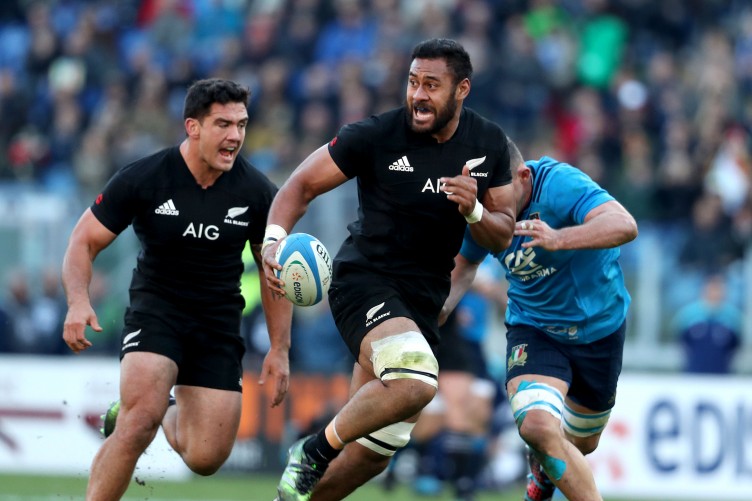 Retallick's absence and Barrett's injury has opened the door for Patrick Tuipulotu to get an unprecedented opportunity to start consecutive tests for the first time since 2016. Understandably Hansen stuck with his two second-rowers during his tenure with Scott Barrett forcing his way into the side through form with Tuipulotu constantly on the fringes.

But 2020, has seen Tuipulotu hit arguably the best form of his career to date, having taken over the captaincy at the Blues at the start of the year guiding them to 5 victories out of a possible seven in Super Rugby and an unbeaten start to Super Rugby Aotearoa.

Brodie Retallick is likely to slot right back into the second row when he returns from Japan while Scott Barrett will most definitely be in the mix, right now is the perfect opportunity for Tuipulotu to prove his test credentials alongside Sam Whitelock, a man he just may replace in the future.

The candidates for a call-up Although New Zealand, do not produce second rowers at the same rate that South Africa do, there are numerous quality locks coming through the system in New Zealand with at least one player from each franchise possibly ready to take the step up to test rugby.

Highlanders' lock Josh Dickson could have potentially made the step up following the likes of Jackson Hemopo and Tom Franklin to have been called up to the test side. Unfortunately for Dickson, who has been extremely successful at the lineout this year, the Highlanders have the impressive Pari Pari Parkinson who is a promising prospect standing at 2.04 metres and 119kg. The most promising All Black prospect from the Hurricanes comes in the form of 23-year-old Isaia Walker-Leawere.

Jack Goodhue's twin brother Josh has also impressed this year while the Crusaders' have two prospects in Mitchell Dunshea and Quinten Strange. One of the most impressive players so far in Super Rugby Aotearoa is 20-year-old rookie Naitoa Ah Kuoi who was a standout when replacing the injured Mitchell Brown in Warren Gatland's starting XV as too has fellow rookie Tupou Vaa'i.

What do the numbers say?

As seen in the image above, Josh Dickson has won more lineouts than any other player in 2020. The Highlanders have one of the more successive lineouts this season with Dickson also managing to claim three steals.

Injured Mitchell Brown has impressed in recent seasons and could have possibly got reward for his form if he was not injured as he grabbed four steals.

One of the most crucial attributes for a modern-day lock is their work rate and effectiveness at the breakdown. Statistically, Chiefs' props Reuben O'Neill (100%) and Aidan Ross (94%) are the most efficient operators at the breakdown with Lachlan Boshier the busiest player to have played at least three games.

As for locks, 20-year-old Naitoa Ah Kuoi's numbers stand out above the rest. The youngster lasted just over a half an hour in the last round of Super Rugby Aotearoa before he was forced to leave the field due to injury. He has however responded to Gatland giving him a shot, albeit, an opportunity afforded due to injuries.

Ah Kuoi has hit 72 rucks in 250 minutes for the Chiefs, 3 more that Patrick Tuipulotu in 230 minutes and 5 more than Sam Whitelock has in 240 minutes. The Chiefs' have held onto the ball well throughout Super Rugby Aotearoa and Ah Kuoi has played a major role in that with the second-rower hitting 62 of his 72 rucks on the attack and was the first arriving player at 44 of those. It's one thing to get to the rucks but it's another to be dominant and Ah Kuoi is. He is effective in 90% of his rucks, a tally that eclipses both Sam Whitelock and Patrick Tuipulotu (80%). He is also effective on defence making 21 tackles with just two of those tackles being passive with the rest being neutral or dominant.

Once again Ah Kuoi tops the carries by a second-rower in Super Rugby Aotearoa averaging 1.73 metres from his 26 carries but while he has been busy with ball in hand, he hasn't been as effective as Tuipulotu. The All Black averages 2.05 metres per carry with the Crusaders' Mitchell Dunshea even more effective with 2.44 metres per carry with the former making 21 carries to the latter's 16.

As mentioned before Shannon Frizell could be considered to temporarily slot in as a second-rower with the Highlanders' man averaging an impressive 2.70 metres for his 24 carries.

With Retallick and Barrett both missing out on any kind of test rugby this year, Patrick Tuipulotu and Sam Whitelock will almost certainly be given the starting roles when the All Blacks take the field.

Josh Dickson impressed for the Highlanders but his injury also rules him out.

This leaves Foster looking at potential debutants, a recall for Luke Romano to provide cover or a positional switch for a blindside flanker.

It's highly possible that Naitoa Ah Kuoi could be earning a test debut off the bench despite having just made his debut for the Chiefs in the opening round of Super Rugby Aotearoa while Mitchell Dunshea could be given his opportunity having impressed over the past few seasons with the Crusaders.

If there is a switch that sees a blindside flanker move into the second row, Cullen Grace's name along with Shannon Frizell's could well be in the mix as too could Marino Mikaele Tu'u.