Sale Sharks have added a few key signings for what could be a huge finish for the Manchester-based club. Steve Diamond's men currently sit in second place just five points behind league leaders Exeter Chiefs.

The Sharks midfield has certainly been boosted by the arrival of centres Manu Tuilagi and Sam Hill. The return to fitness of Lood de Jager before lockdown will also solidify the pack.

Another addition to the side is that of former Stormers forward Cobus Wiese who is set to join the side subject to his visa approval.

We take a look at how the side could line up for the run into the playoffs.

The Sharks have quickly built some depth in the front row with Oosthuizen the likely starter at loosehead. Ross Harrison is a more than capable option at loosehead having been the Sharks go to starter before Oosthuizen's arrival.

Russian loosehead prop Valery Morozov will also provide plenty of cover and even push for a starting jumper.

With Rob Webber having retired, Akker van der Merwe is set to assume the starting jersey for the club with Curtis Langdon and Cameron Nield likely to back the Springbok hooker up.

Van der Merwe picked up an injury against Saracens in the Premiership but is set to be fit for the return of the competition.

Coenie Oosthuizen could also switch to the right-hand side of the scrum if need be but Jake Cooper-Woolley has certainly made his mark at Sale since joining from Wasps.

WillGriff John has been rumoured with a move to Wales recently but is set to continue is fine form that saw him earn a call up to the Welsh squad.

Wiese spent a lot of time on the side of the scrum for the Stormers but considering the depth that Sale has in the back row, Wiese is likely to pack down alongside Lood de Jager.

Wiese has regularly played in the second row and similar to Pieter-Steph du Toit with his ability to play at lock and blindside flank.

Although Bryn Evans has been released by the side, they do have options outside of Wiese with Matt Postlethwaite being promoted from the academy while Diamond also has Josh Beaumont and James Phillips at his disposal.

Finally, Jean-Luc du Preez has also featured in the second row recently with his brother Dan having also played in the position. 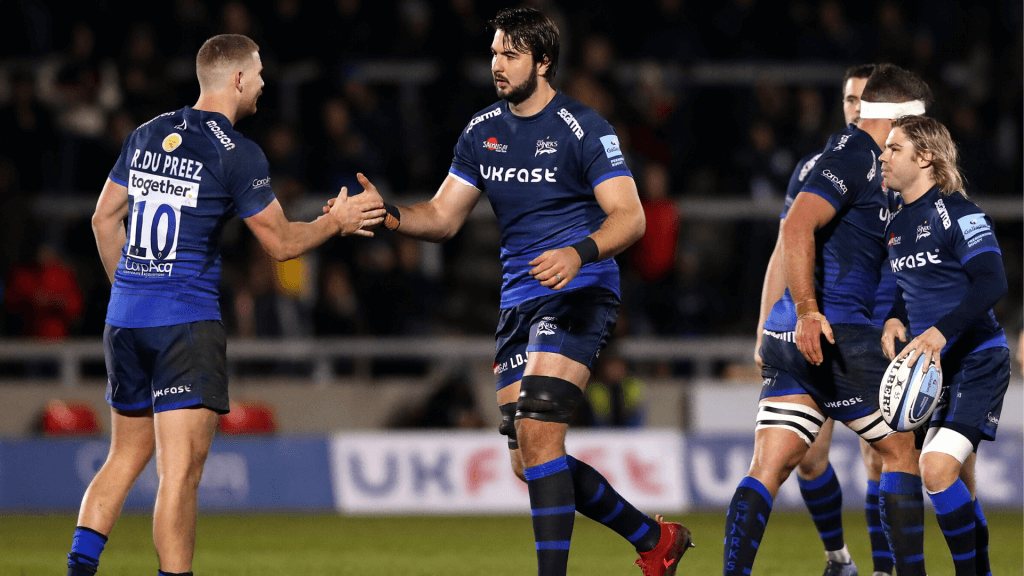 De Jager is one of the two World Cup-winning Springboks on Sale's payroll and the fans will certainly be keen to see Lood in action after he made his debut off the bench against London Irish before the Premiership was brought to a halt.

Steve Diamond can't do much wrong when piecing his back row together even though he has lost the services of Mark Wilson who has returned to Newcastle.

We have slotted Jean-Luc du Preez in at blindside but he could quite easily feature at lock or no.8 or even at openside. Diamond could also go with the tackle machine Jono Ross or another fetcher in Ben Curry.

A selection headache that many Premiership bosses will certainly envy.

Tom Curry has played at blindside and no.8 for England but he is likely to return to his favoured openside flanker jersey with Sale.

Regardless of where he plays, he will make an impact and arguably the closet thing to a certain starter in the Sale back row.

Du Preez was one of the form no.8s in the Premiership before the season was put on hold.

The Springbok loose forward is likely to continue in the starting role for Diamond's side with Ben Curry and Jono Ross more than capable in the role.

From the Currys to the du Preezs to the Goodhues, we take a look at 1⃣1⃣ twin brothers in rugby 🤝

Will Cliff and Gus Warr are set to play back up to Sale's star Springbok Faf de Klerk.

The World Cup-winning South African halfback has taken his game to another level and has been a standout for Sale since his arrival at the club.

Du Preez is another Springbok in the Sale Sharks' line up but he won't have an easy run into the side with American International AJ MacGinty also at the club and youngster Kieron Wilkinson being promoted to the senior squad.

With Chris Ashton having left the club, the winger slots in the starting XV are somewhat open and Marland Yarde is set to battle it out for the #11 jersey with Bryon McGuigan.

Sale fans will be salivating at the prospect of Manu Tuilagi and Rohan Janse van Rensburg linking up in the midfield together.

While Janse van Rensburg is set to continue as the starting inside centre, he will also have some tough competition in Sam Hill and the James brothers.

The most exciting addition to the Sale Sharks' squad, Tuilagi's move from the Leicester Tigers was certainly a major coup for Diamond's side and one that could certainly make them genuine contenders for the title.

Some tough calls but here is our Premiership XV of players who have switched/joined Premiership clubs ahead of the season resuming, thoughts?🤔

Youngster Arron Reed will want to make his mark after being promoted from the Academy but Sale's deadly finisher is likely to continue as the side's go to starter.

The versatile James brothers could slot in across the backline or provide plenty of cover from the bench with Bryon McGuigan also throwing his name in for a start at wing or fullback.

Hammersly has been incredibly safe and effective for Sale throughout the Premiership this year featuring in all but two games.