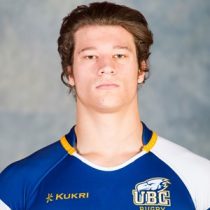 Born in Penticton, British Columbia (B.C), Penny played all 4 seasons of his high school rugby career with the Pen High Lakers before taking his talents to the UBC Thunderbirds in 2014.

Alongside future Seawolves teammate Brock Staller, Penny, and the Thunderbirds placed 3rd at the 2015 World University Rugby Cup and won the B.C Premier League for 3 consecutive years from 2015 to 2017.

While at UBC, he won the 2015 Canadian Rugby Championship with the B.C U19 men and gained international experience when he was selected to Canada’s U20 squad in 2016.

In 2018 he played at flanker with the BC Bears and won the 2017 Canadian Rugby Championship alongside fellow Seawolves Phil Mack, George Barton, and Brock Staller.

He was included in Canada's Pacific Nations squad where he would add to his 3 test caps.

In 2019, he appeared in each of the Seawolves’ four campaigns including a starting role in the 2019 Championship Final.

In September 2021, he signed a three-year contract extension with the Major League Rugby side.