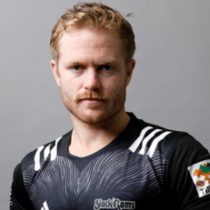 Born and raised in Queensland, Lucas represented the Australian U20’s at the Junior World Cup in 2011 and 2012 before signing for the Waratahs prior to the 2013 season.

The Lucas name is well known in Australia with Matt's brothers Tom playing for the national Sevens side, while his other brother Ben represented the Reds and his youngest brother Isaac represented the U20 national side in 2018.

In August 2017, the Brumbies signed scrumhalf Lucas on a two-year deal that will see him join the team for the 2018 Super Rugby season.

The scrumhalf has also represented the Sydney Rays in the National Rugby Championship since the competition’s inception in 2014, skippering the side since 2015.

Lucas signed for the Brumbies for the 2018 Super Rugby season and heads into the 2018 season with 33 appearances and fourteen points.

Lucas featured in all 16 of the Brumbies Super Rugby matches before signing a deal with Japanese Top League Champions Suntory Sungoliath during the Super Rugby off season.