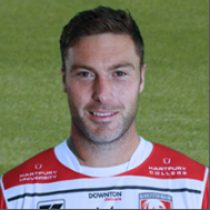 Banahan's rugby career began as a second row forward and having spent time at London Irish Academy as a lock. Banahan moved to Bath where his career as a back began. Comfortably at both outside centre and on the wing. His powerful combination of size, strength and speed made him a potent weapon in the Bath United

The destructive ball carrier operated mostly as a winger for Bath since making his debut in 2006 and has gone on to represent England at Sevens, Saxons and full national level.

Named in the wider England Sevens squad in 2007, Banahan then represented England Saxons three times in 2008, before making his senior debut in 2009 against Argentina.

He went on to earn 16 caps for England, including being selected for the 2011 World Cup squad.

Banahan has racked up over 250 appearances for Bath Rugby before Gloucester announced that he would switch West Country allegiances for the 2018/19 season.

Banahan announced that the 2020/21 season would be his last as a professional rugby player.