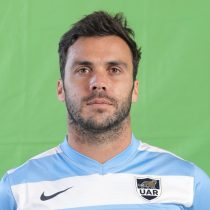 Lanjardo, who can play at both 9 and 10, has been around on the rugby scene in Argentina since 2008 and has made over 70 caps for the Pumas. He was called up to the Rugby Championship squad in 2014.

He was a member of the national team at the 2015 Rugby World Cup, playing a total of 297 minutes over a 7 game spell.

Landajo signed to play for the Jaguares for the 2016 Super Rugby campaign and continued his stay with the club for the 2017 season, playing on six occasions.

Named in Daniel Hourcade's squad for the November Series, the agile scrum-half has played 70 Tests for the Pumas. heads into the 2018 Rugby Championship with 24 test caps.

Landajo finished the 2018 Rugby Championship as one of his country’s most capped international with 84 appearances.

In March 2019, he signed a deal with Harlequins. At the time of bringing the Premiership season to a halt Landajo had scored two tries in five games from his 647 minutes played.