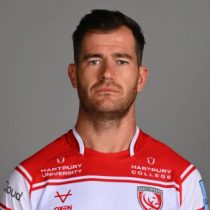 A talented midfielder, Mark Atkinson has built a reputation for his physicality and playmaking ability in the centres.

Atkinson started out his career at the Sale Sharks in 2008 before joining Wasps two years later.

Stints with Championship sides Esher and Bedford Blues followed before he joined Gloucester Rugby ahead of the 2014/15 season.

Since joining Gloucester, Atkinson has gone from strength to strength and has established himself as a first-team regular with an outstanding set of performances.

Making his 150th Gloucester Rugby appearance against Newcastle during the 2021/22, Atkinson is widely regarded as a fan favourite and is an instrumental part of the club.

Atkinson also earned a Barbarians call-up to play against England at Twickenham back in 2019 and has attended multiple England training camps over the years.

The big centre's form during the 2021-22 Premiership was enough to earn him a call-up to Eddie Jones' England squad for the 2021 Autumn internationals.

He made his test debut off the bench against Tonga at Twickenham during the 2021 Autumn Nations Series.

In December 2021, Atkinson penned a multi-year deal to stay with the Cherry and Whites.