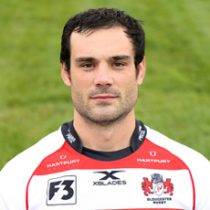 Standing tall at six-foot-eight inches the Argentinian international Mariano Galarza signed for Worcester Warriors for the 2013/14 season. The second row made his international debut against Scotland in June 2010 and the lock has gone on to represent his country at the 2011 IRB Rugby World Cup and the 2013 Rugby Championship.

In the summer of 2010, the massive Argentinian signed for Leinster but left later in the season to play for Argentine side Pampas XV, who took part in the Vodacom Cup. Galarza returned to Europe with Worcester in 2013, but only played a season there as they were relegated to the Championship.

It was announced that Galarza would move to Gloucester for the 2014/15 season. Galarza was called up into the 2014 Rugby Championship squad for Argentina in September. The Argentinian second row joined the Warriors from Leinster after making 4 appearances for the Irish club.Previously, Mariano represented Pampas XV in his native Argentina, a club that prides itself as the stepping-stone to help talented Argentine players towards a professional career in Europe, a club that incidentally Gloucester picked up front rower Matias Cortese from.

A shoulder injury sidelined Mariano for much of the 2014/15 season, but his return was vital in helping the Cherry and Whites lift the European Rugby Challenge Cup. He went on to make 19 appearances in his second season at Kingsholm and signed a new contract.