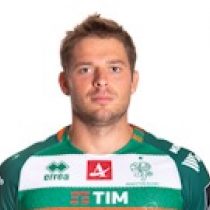 Barbini played with Italy's U20 and Emerging Italy and made his debut in the Maggiore National at RBS 6 Nations 2015 against Ireland taking over from Alessandro Zanni.

He was called into the Italian squad ahead of the 2015 Six Nations Championship, the flanker gave solid performances that were impressive enough for him to receive another call-up to the Italy squad for the 2017 Six Nations tournament.

He was named for the 2019 Six Nations squad, having had 2 previous 6 Nations appearances.

As of December 2019, he has made 70 appearances for Benetton and has scored 15 points.