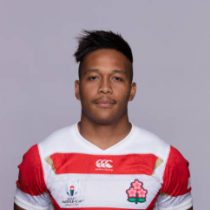 Kotaro was born in Pretoria, South Africa but finished his schooling at Tōin Gakuen High School in Yokohama.

He returned to SA in 2012, enrolling in the Sharks Academy in Durban, becoming the first Japanese player to join up. He was invited to a U20 training camp for the 2013 IRB Junior World Championship.

Matsushima made his debut for Sharks XV during the 2013 Vodacom competition aginst Pampas XV. He also featured prominently in the 2013 U21 Provincial Championship.

He joined Suntory Sungoliath for the 2014-15 Top League season, his performances earned him inclusion in the Top League Team of the Season.

Following on from this, Kotaro spent a season with the Waratahs prior to the 2015 Super Rugby season before joining Melbourne Rebels on a short-term deal for the 2016 campaign.

The fast quick footed player often makes it over the advantage line and was selected in the 2015 RWC. He played all four games scoring one try.

Kotaro played 9 times during the 2017 Super Rugby season for Sunwolves.

Matsushima was selected in the Brave Blossoms squad in the 2017 June Internationals to face off against Romania and Ireland.

Kotaro plays for Suntory Sungoliath in the Japanese Top League & was named in Jamie Joseph's Japan squad for the Autumn Tests.

He scored Japan's first World Cup hat-trick against Russia on 20 September 2019 in the opening game of the 2019 Rugby World Cup in Tokyo and was also awarded the player of the match in the same match.

He Went into the quarter finals of the World Cup with 38 caps.

In January 2020, it was confirmed that he will head to France and join Clermont in the Top 14.