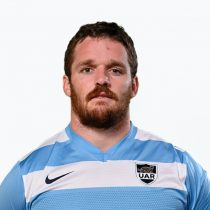 Montoya began his senior career at Club Newman in Buenos Aires in 2013, before joining Pampas XV in 2014 for two seasons and then signing for the Super Rugby side Jaguares in 2016.

An international representative at Under-20s level in 2013, he spent four seasons in Super Rugby and played in the 2019 Final against the Crusaders.

Montoya spent most of his early career behind former Argentina captain Agustin Creevy but has since taken over the starting jumper.

In January 2021, the Los Pumas hooker was confirmed as Leicester Tigers latest signing joining the club for the remainder of the 2020/21 season on a multi-year deal.

The hooker has 63 test caps including appearances in the Rugby World Cup campaigns in 2015 and 2019, since making his Test debut against Uruguay in 2014.

He has scored nine tries at international level and was part of the Argentina squad at the 2020 Tri Nations, featuring in the history-making victory over New Zealand.