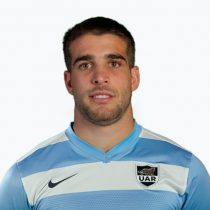 An exciting talent Juan Cruz Mallia has represented a number of Argentina's national sides including the u20s in 2015, who he captained.

He went onto represent Argentina in the America's Rugby Championship before being called up to the senior national side ahead of the 2018 June Tests.

He made his test debut off the bench against Scotland and was included in the squad for the Rugby Championship later in the year.

A versatile back, Mallia is regularly a centre but has featured at fullback and wing for the Jaguares and even fly-half for the Argentina XV.

Having represented the Pumas at the Rugby World Cup, he joined French club Toulouse in January 2021 as a medical joker. He moves to France with six test caps to his name.