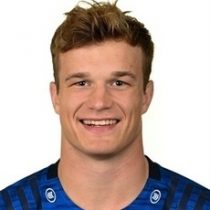 Born in Dublin, Van der Flier has represented Ireland U20 at the Junior World Championships in South Africa 2012, and played for them in the following year's championship in France as well as the U20 Six Nations 2013. A member of Leinster Academy making his British & Irish Cup debut for Leinster A against Moseley in January 2014 and went on to lift the trophy that season.

The UCD player made his Leinster debut in the PRO 12 against Zebre in Italy in 2014 helping his side to a 3-20 win. After making a real impact for Leinster in the 2015/16 season, van der Flier was somewhat surprisingly selected in Joe Schmidt's 6 Nations squad for 2016, becoming the first member of Wicklow RFC to earn an Irish cap. His father also played at Wicklow in the 80's & 90's where he was known as one of the hardest tacklers in the side.

He made his test debut away to England in the 2016 Six Nations, Schmidt giving the former Wesley College flanker, a starting role. His home debut came against Italy in the sides memorable 58-15 triumph in the Aviva Stadium.

His 2015/2016 season was brought to an end with an ankle injury against Ulster in April, missing the Ireland summer tour to SA. He recovered from the operation in time to have a complete pre-season.

Making his return to the international arena in Solider Field, Chicago - van der Flier was a first half replacement in the famous victory over the All Blacks. He went on to top the Irish tackle count despite missing the opening quarter of the match. Winning only his third cap in the process.

He continued to impress during the 2016 November Internationals, showing off his aggressive line-breaking abilities and tenacious workrate and featured heavily in Leinster's charge to the semi final's of Europe, many considered him as an outside shot for the B & I Lions.

In May 2017, van der Flier was named in the Ireland squad for the summer tour to USA & Japan.

Starting off the 2017/18 season in devastating fashion, van der Flier was named in the Ireland squad to face France in the 2018 Six Nations.

As of November 2019, he has represented Ireland on 23 occasions and has 73 appearances for Leinster with 40 points scored.

He went into the 2019 Champions Cup with 25 appearances in the tournament and 5 points scored.

Van der Flier cemented his name in Ireland's squad for for the 2020 Six Nations with 23 caps under his belt.

World Rugby Player of the year 2022