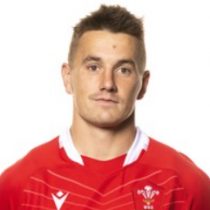 Davies, who was born in Birmingham, has become one of the best young centres in world rugby, combining tremendous athleticism with deft technical attributes. He won the grand slam with Wales in 2012 and after recovering from a slow start to the 2013 championship became one of the form players in the tournament & included in 2013 British and Irish Lions squad to tour Australia.

Davies possesses the pace to make those arching outside centre runs that are so devastating against even the most organised defences in world rugby and he has the hands to exploit those line breaks and turn them into tries.

After playing some terrific rugby in the opening games of that tour, the Welshman was called up to replace Brian O'Driscoll as the Lions outside centre for the crucial third and final test against the Wallabies. In Australia, the Welsh centre was paired with Brian O'Driscoll for the first two Tests against the Wallabies and then was reunited with his fellow Welshman Jamie Roberts for the final Test in Sydney.

He scored three tries on the 2013 Tour crossing the whitewash against the Barbarians, Combined NSW-QLD Country and Super Rugby outfit the New South Wales Waratahs.

After an 8-year spell at Scarlets, Davies declined the chance for a WRU central contract and moved to Clermont in France. Unfortunately, Davies ruptured his knee ligaments in the last round of the 2015 Top 14 playing for Clermont and was ruled out of the 2015 RWC.

Davies spent two seasons at Les Jaunards before returning to the Scarlets. The Welshman was part of the side that lost the final in 2015 to Toulon. In November 2015, he became the 17th player to sign a dual contract with the WRU & Scarlets returning to his old club. He re-joined the Scarlets at the start of the 2016/17 season and has scored 40 tries in his 130 appearances for the Welsh region.

In April 2017, Davies was selected by Warren Gatland to go on his second Lions Tour after playing a starring role four years ago in Australia. Davies was named the Lions Player of the Series in New Zealand having featured in all 3 of the Lions Tour Tests.

He returned to the Wales test squad for the end of year tests and started Wales test against Australia where he picked up a foot injury which will see him out of action until at about April 2018.

One of the finest centres in the world, Davies featured in Wales' World Cup campaign in 2019 but picked an injury during the tournament that ruled him out of the 2020 Six Nations.

He finished the World Cup with 87 tests, 6 for the Lions. In those 87 test caps he has started 84 times and has scored 16 tries.