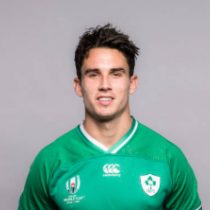 Born in Auckland, NZ, Carbery moved to Ireland and played much of his underage rugby with Athy RFC before attending Blackrock College, winning the Senior Cup in 2014 during his time there, a team that included Munster's Conor Oliver and Leinster's Jeremy Loughman and Hugo Keenan.

Carbery joined Clontarf FC and became a standout player for the Dublin club, contributing to the club's AIL victory for the 2015/16 season, being named AIL Player of the Season during that year. He started five games for the Ireland U20s at the 2015 Junior World Championship, Italy. The out-half can also fill in at full-back and was awarded for his form with a Leinster academy contract for the 2015/16 season.

Carbery made his debut for Leinster away to Glasgow last season in March, coming off the bench in a 12-6 defeat. He began the 2016/2017 season in style, scoring two tries on his home Pro 12 debut against Treviso while also starting Leinster's Champions Cup opener at home to Castres where his smooth distribution, off-the-cuff play and sublime line breaks stood out.

In November 2016, Carbery’s first involvement in Test rugby came in Ireland's 40-29 win over New Zealand in Chicago, he replaced Johnny Sexton in the second half to steer Ireland to a historic victory over the All Blacks. His first Test points came with the conversion of Henshaw’s game-clinching score. Carbery was rewarded with a senior contract for the 2017/2018 season.

Following months of speculation, Carbery confirmed that he would join Munster ahead of the 2018/19 season, as he goes in search for playing time at flyhalf. Carbery featured in two of Ireland's 2018 June test against Australia.

He went into the 2018/19 season with Munster having scored 101 points in 37 appearances for Leinster as well as 31 points in 12 tests for Ireland. He was selected in the 31-man Ireland squad for the 2019 Rugby World Cup, making his debut at the tournament off the bench in Ireland's shock 19–12 defeat against hosts Japan on 28 September 2019.

A wrist injury sustained whilst on provincial duty with Munster ruled him out of the 2020 Six Nations Championship. As of May 2020, Carbery has made 17 appearances for Munster, and has scored 161 points.