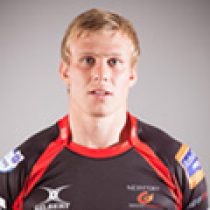 Jevon Groves' early rugby career was with Cardiff Blues. He was a member of their Academy for three years and affiliated to the Cardiff club team in the Welsh Premiership, starting off in the backs but eventually moving to his favourite blindside flanker position.

While he was with the Wales Under-20s he got to know Rob Beale and Rob Appleyard, now the Dragon's director of rugby and defence coach, respectively, and Beale in particular encouraged him to join Cross Keys after he was released by Cardiff. He captained the Wales Sevens team to the Plate semi-finals during the 2010 Commonwealth Games and has also made international appearances for Wales in the Under-19s and Under-20s.