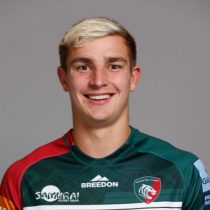 From a farming family in Norfolk, Jack van Poortvliet attended Tigers Rugby Camps at North Walsham RFC before joining the club’s developing player programme and then entering the academy system.

Originally a fly-half, Jack moved to scrum-half and played in back-to-back Under-18 League title-winning squads with Tigers in 2017/18 and 2018/19.

The 2018/19 campaign also featured a first experience of senior rugby in the Premiership Shield and appearances for England Under-18s for the Oakham School student.

He made his senior debut for the club at the start of 2019/20 and a first Premiership start at Sale Sharks before his 19th birthday among five first-team appearances in that campaign.

Jack is the son of Jeff van Poortvliet who played for Saracens in the early 1990 and the scrum-half also captained Oakham age group sides and the 1st XV.

He was included in the 2021 England squad for the u20 Six Nations.

He enjoyed a breakout season with Leicester Tigers in 2021/21 featuring in 19 of Leicester's 26 Premiership matches as the Club went on to win the competition finishing every round on top of the table and winning the title.

He scored three tries and assisted three throughout the season.

His form earned him a test debut.