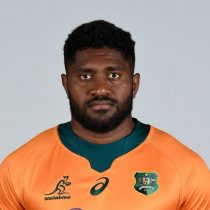 Fijian-born Isi Naisarani is an imposing figure at 1.95m and 110kg. He spent his first year in Australia playing in the Shute Shield for Souths and has been a force all season.

His senior career began with Brisbane City in the NRC where he played seven matches and crossed for five tries in what was a standout year for the youngster before beginning contracted to the Western Force for the 2017 Super Rugby season.

He enjoyed an excellent Super Rugby debut campaign in 2017, claiming the Nathan Sharpe Medal as their Player of the Year. He was the first player ever to do so in their first season of professional rugby, compiling some impressive statistics along the way with 126 runs, 662 run metres, 22 tackle busts and 108 tackles.

In September 2017, Naisarani signed a one-year deal with the Brumbies for the 2018 Super Rugby season. The young loose-forward featured in all 15 of the Western Force's 2017 Super Rugby matches.

In December 2017, he was voted best Australian Super Rugby player in just his first season as a professional.

Naisarani made 15 appearances for the Brumbies in 2018 taking his Super Rugby cap tally to 30 by the end of the season.

At the end of the 2018 season, he signed with the Rebels and linked up with former Force coach Dave Wessels at his new side.

The Fijian-born back-rower became eligible for Wallabies selection in April 2019. The following month saw him re-sign with Rugby Australia and the Melbourne Rebels until the end of 2021 on a new two-year deal.

Naiasarani was one of three uncapped players named in the Wallabies 2019 Rugby Championship squad where he made his debut and went into the World Cup with 4 caps to his name.