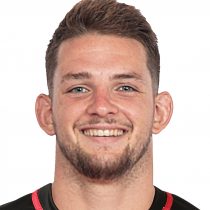 Marchand arrived at the Stade Training Center in 2013 and successfully passed through the youth categories.

Winner of the 6 Nations Tournament and the U20 World Championship in 2018, Marchand had his first appearance with Toulouse's first team in Montpellier in September 2018.

During the 2018-19 season, he was propelled onto the field with the professionals following the injuries of Leonardo Ghiraldini and his brother Julien during the 6 Nations Tournament.

He was able to get up to speed and offer high-level services, especially in the final stages of Top 14, taking part in the Champion's Title. During that same season, he signed his first professional contract with the club until 2022.

Marchand signed with Lyon for the 2021/22 season as he goes in search of more starting minutes in the TOP14.