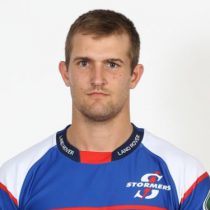 Born and bred in Bloemfontein, where he attended Grey College, Whitehead represented Free State in several youth competitions at the Under-16 & Under-18.

After finishing high school, he joined their Academy and played for the Free State U19. The following season, he was part of the Free State U21 squad that played in the 2009 Under-21 Provincial Championship. He also made his first class debut for their senior side, the Free State Cheetahs during the 2009 Currie Cup Premier Division, coming on as a late replacement in their match against the Sharks.

In 2010, Whitehead played Varsity Cup rugby for the UFS Shimlas.

In the second half of 2010, Whitehead played a crucial rule in the Free State U21s run to the semi-finals of the 2010 Under-21 Provincial Championship, scoring three tries and kicking 120 points with the boot to end the season as Free State's top points scorer.

He then played on six occasions for UFS Shimlas in the 2011 Varsity Cup competition, contributing 26 points.

After the 2011 Varsity Cup competition, Whitehead moved to Port Elizabeth to join the Eastern Province Kings for the 2011 Currie Cup First Division. He made his EP Kings debut in their first round home match against the SWD Eagles; he came on with just 20 minutes left in the match, but kicked three penalties to help his side to a 28–20 victory.

With the Kings being granted entry to play in the 2013 Super Rugby season, Whitehead was named in their 35-man squad.


With the Kings not playing Super Rugby in 2014, Whitehead joined the Sharks for pre-season training prior to the 2014 Super Rugby season, but he later returned to the Kings without any involvement at the Durban-based franchise.

Whitehead joined Welkom-based side the Griffons for the 2016 season and a year later he joined Griquas.

January 2018 saw the Stormers secure a loan deal with Whitehead following the departure of Robert du Preez to the Sharks.