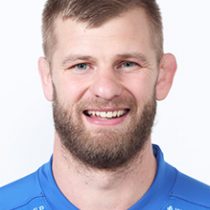 Another product of the hugely successful Saracens' Academy, Goerge Kruis produced on his early promise and has gone onto becoming a world-class lineout operator. Kruis was a skinny teenager who played on the wing but he bloomed late and was still playing for Dorking at the age of 18. Now the lock is indispensable for Saracens and England.

Kruis benefitted from a season with Barking in 2008/09, his first taste of men’s rugby, and featured for Bedford Blues two seasons later alongside handful appearances in Europe and the Premiership for the Men in Black during the club’s first title-winning campaign.

The lock has become a vital component in the tight five at club and international level since making his professional debut for Sarries in 2009. He went on to represent England Under-20 at the 2010 IRB Junior World Championships and has continued to grow at club level.

Kruis has played a huge part in a further four domestic successes as well as three European Cups, scoring in the second final against Clermont Auvergne.

On the international stage, the British & Irish Lion earned his first senior England cap against New Zealand in the 2014 Autumn Internationals and went on to play in the Rugby World Cup the following summer.

Kruis enhanced his reputation further during the historic 3-0 series win over Australia in the summer of 2016.

The second row would miss the 2017 Six Nations with an ankle injury but was still selected for his 1st Lions tour as he was named in the squad to travel to New Zealand with 20 English caps to his name.

Kruis continued to impress for club and country as he won the Champions Cup and Premiership double for the 2018/19 season with Saracens before he was named in England's Rugby World Cup squad.

He helped England reach the Rugby World Cup Final, his second tournament, before being named in their squad for the 2020 Six Nations.

He entered the competition with 17 caps in the tournament and 41 test caps in total.

In May 2020, it was confirmed that the England forward would leave Saracens for Japanese Top League side, Panasonic Wildknights.

2022 saw him announce retirement from rugby to pursue a career in business.