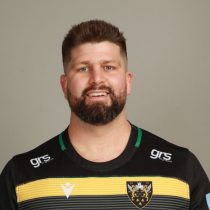 Playing in the Western Province U18 Academy team as a lock, van Wyk converted to prop in 2010 and played for Boland in the U21 Currie Cup. Winning the Varsity Cup with the University of Cape Town in 2011, the loosehead then played for Western Province U21 for two years before getting his Vodacom Cup debut in 2013.

Van Wyk was named as a member of the Western Force's Wider Training Group in 2014, earning his first Super Rugby cap three months later as an injury replacement.

In May 2017, Northampton Saints announced the signing of Western Force prop Francois van Wyk for the 2017/18 season.

The loose head is South African-born and represented his hometown club Western Province having come through the academy setup in Cape Town.

Also educated at the University of Cape Town, van Wyk made the switch to Perth in 2014 and has played 12 times for the Force in Super Rugby, providing a powerful presence with his 17st 13lb frame.

His debut came against Harlequins in a 30-22 victory in September 2017, and the front rower would go on to feature 25 times for Saints during his first season.

In March 2021, it was announced that van Wyk would be joining Leicester Tigers ahead of the 2021-22 season.