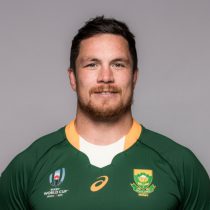 The versatile Bath loose forward has the ability play in any position in the back row, which made him an all-round threat to the opposition.

The former Stormers flanker has impressive breakdown skills and provides a significant physical presence which makes him a valuable asset for any team. Louw regularly finds himself in the Springbok starting lineup thanks to some sublime performances for club and nation.

His ability to steal the ball at the ruck and to form a vital link between the forwards and backline has seen him become one of the most respected forwards in world rugby.

In March 2019, Louw signed a new deal Bath Rugby having arrived in the West Country at the start of the 2011/12 season, making 130 appearances.

Louw was named in South Africa's squad for the 2019 Rugby World Cup and helped the team win the tournament, defeating England in the final.

During the World Cup, Louw featured prominently in the Springboks' successful Bomb Squad that received high praise for their impact from the bench in the latter stages of the game.

He made a telling impact during the World Cup winning a crucial penalty in the semi-final against Wales shortly after replacing Siya Kolisi.

After the tournament, Louw announced his retirement from test rugby and confirmed that the 2019/20 Premiership season would be his last.