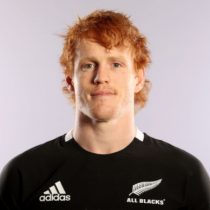 Born in Scotland before moving with his family to Pukekohe at the age of seven, the former New Zealand gymnastics representative's short rugby career has already taken its share of twists and turns.

After leaving St Kentigern College in Auckland he played age-grade rugby for Counties-Manukau before heading south to study commerce at Canterbury University.

A Canterbury Colts representative in 2015, his form in Christchurch club rugby saw him awarded the Hawkins Medal as the competition’s top player the following year and led to a contract offer from Tasman to play in the 2016 Mitre 10 Cup.

Rotating the starting number 9 duties with the more experienced Billy Guyton, Christie made 10 appearances and scored one try as the Makos reached the Premiership final before going down to a strong Canterbury side.

His impressive first season at provincial level meant that it came as no surprise when he landed a Super Rugby contract with the Chiefs ahead of the 2017 Super Rugby season.

In July 2017, the Livewire Tasman halfback Christie signed a two-year contract with the Hurricanes.

He joined the Hurricanes off the back of a successful debut Super Rugby season that saw him earn 8 caps for the Chiefs. Christie starred for Tasman during the 2017 Mitre 10 Cup as his side made their way to their 2nd Mitre 10 Cup final in as many years.

He made 14 appearances for the Hurricanes during his two seasons with the club scoring one try before he signed with the Blues for the 2020 Super rugby season. He entered the 2020 season with 22 Super Rugby caps and one try.

Christie heads into the 2020 Mitre 10 Cup season having made 43 appearances for Tasman Makos.

The scrumhalf has become an integral part of the Blues and helped the side end their 18-year wait for silverware as they won the 2021 Super Rugby Trans Tasman earning himself a call up to the All Blacks squad.