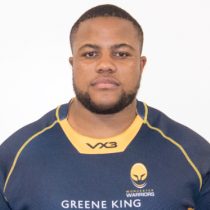 A mobile prop from Zimbabwe, Mudariki made his International debut in 2015 against Madagascar in a RWC qualifier and scored a try on debut.

He has spent much of his career in France where he spent a number of years in the Castres Academy side before signing for Stado Tarbes Pyrenees.

Mudariki made his third and final appearance for Warriors in 2020 as an ankle injury sustained in training brought an early end to his season.