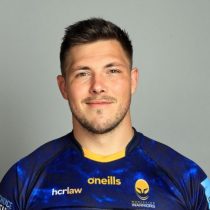 Ethan Waller was born in Kettering, and like his older brother Alex, was educated at Wellingborough School. His debut for the Saints came in November 2012 against Harlequins having come through the Saints Academy.

Ethan’s breakthrough season came in the double cup-winning campaign of 2013/14, with Alex Corbisiero unavailable through injury. He wasted no time in staking his claim for the Saints number one shirt alongside older brother Alex and has become one of four outstanding loose heads at the club.

Voted the Young Player of the Season for 2013/14, Ethan has emerged as one of the club’s most promising players and will be hoping for more first team experience during future international windows. After 85 games for Northampton, he was signed by Worcester Warriors ahead of the 2017/18 season.

Waller arrived at Sixways from Northampton Saints in the summer of 2017 and has established himself as crowd favourite and a respected figure among his team-mates as he is the club’s Rugby Players Association representative.

During his first season at Sixways, Waller was ever-present, making 25 appearances in the Blue and Gold. He made 26 appearances in 2018/19, 15 as a replacement.

Waller’s current contract was due to expire at the end of the 2019/20 season but he committed himself to Warriors until the end of 2021/22.

He notched up over 100 appearances for Worcester by February 2022 before signing a deal to return to Northampton Saints.