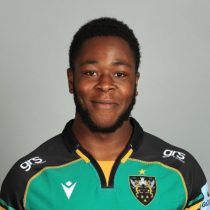 After playing his age-group rugby within Northampton’s Junior Academy, Emmanuel Iyogun joined the Senior Academy ahead of the 2019/20 season.

He earned international recognition during that debut campaign, featuring for England at loosehead throughout the 2020 Under-20s Six Nations Championship, including an appearance against Ireland at cinch Stadium at Franklin’s Gardens.

The versatile forward established himself in Saints’ Academy set-up quickly, playing two years above his age when he made his Under-18s debut in 2017.


Captaining Saints’ Under-18s in the 2018/19 season at No.8, Iyogun transitioned into the front row as he made the step up into a full-time contract with Northampton in 2019/20.

He was named the Club’s Breakthrough Player of the Season in his debut campaign in 2019/20, having burst into the spotlight with a string of fine performances for the senior side in the Premiership and Champions Cup aged just 19.

Since then, Iyogun has become one of Northampton’s front-line looseheads, making 20 appearances during the 2021/22 season alone and starting the Premiership semi-final clash against Leicester Tigers.

Ahead of the 2021/22 campaign, Iyogun signed a new long-term contract with Northampton Saints