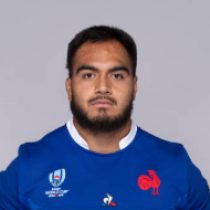 A former France U20 international who showed early signs of promise, Setiano featured in the Toulon Academy before he was promoted to the senior squad in 2016.

In July 2016, he was named on the Development List of 30 players under 23 with high potential that the coaches would follow closely.

In November 2017, he was selected with the French Barbarians to face the Māori All Blacks at the Stade Chaban-Delmas in Bordeaux and helped the side to 19-15 victory.

He made 18 appearances for Toulon in his first two seasons of the TOP14 but made his mark in the 2018/19 season featuring in 29 of Toulon's 32 matches, working in tandem with Marcel van der Merwe.

In June 2018, he featured for the French Barbarians again in New Zealand.

His form during the 2018/19 season earned him his first call up to the French squad to prepare for the Rugby World Cup in Japan.

He made his Test debut against Scotland ahead of the World Cup and made three appearances at the World Cup in Japan taking his test match tally to six.

Setiano finished the 2019 Top 14 season with 55 appearances for Toulon.