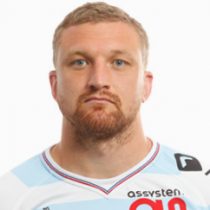 Bird, the tallest member of his former side the Crusaders after an impressive campaign with the 2012 ITM Cup Premiership-winning Canterbury team cemented his spot in the starting squad of Crusaders during 2013.

After two seasons in the Crusaders’ wider training group and only a single provincial cap prior to the 2012 season, patience and hard work paid off for Bird in the 2012 ITM Cup competition. He appeared in every match for Canterbury and shone as one of the best lineout technicians in the competition.

He made his All Blacks debut against Japan in 2013 and was also part of the 2011 New Zealand U20 IRB Junior World Championship winning team alongside Chiefs team-mates Brodie Retallick and Sam Cane.

Bird made his All Black debut against Japan in November 2013, he was struggled to break into the All Black team since and the partnership of Sam Whitelock and Luke Romano at the Crusader meant Bird was benched for much of his time at the Crusaders until the end of 2015.

He signed with the Chiefs ahead of the 2016 Super Rugby season and managed to become a regular starter in the team.

At 2.06m and 112kg, he was the tallest lock in the Chiefs squad. He signed a contract extension in March that would see him remain with the Chiefs in 2018.

Bird was in fine form with Canterbury helping his side to their 2nd Mitre 10 Cup final in 2 years.

Bird's last All Blacks game was against Scotland in 2014. He played both of the All Blacks non-test matches during the November tests.

He suffered an injury during the opening game of the season and had not made another appearance by May.

At the end of May Bird signed a deal with Paris-based side Racing 92 and linked up with the side following the conclusion of the Super Rugby season.

In November 2020, he signed a new contract with the French side.

In May 2021, it was confirmed that the former All Blacks lock would be returning to New Zealand from a successful stint in France to link up with the Hurricanes for the 2022 Super Rugby competition.