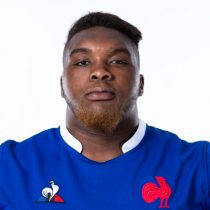 Bamba is another modern-day prop with the potential to become one of the best props France has ever produced.

The promising rookie was a standout as France won the u20s Six Nations and was named in the squad the U20 World Championship.

The powerful tighthead that gets around the park made his debut for Brive in the Top14 in 2017 at the age of 19.

He continued to impress for Brive during the 2017/18 Top14 and Challenge Cup season.

Bamba made waves during the U20 World Championship and was one of the top performers in the competition and was a nominee for the Player of the Competition.

Following the conclusion of the competition, he signed a five-year deal with Lyon but returned to Brive on loan for the 2018/19 season.

In October 2018, Bamba was named in the France senior squad for the November Internationals.

He made his test debut off the bench against Fiji, becoming the first player to make their test debut for France while playing in the PRO14 and his form led to him being named in the France Six Nations squad for 2019 and earned his first start against England in Round two of the competition.

At the age of 21, he was named in the France Rugby World Cup squad and featured off the bench in their first game of the competition against Argentina. However, his tournament was cut short as he picked an injury and could not add to his 7 test caps.