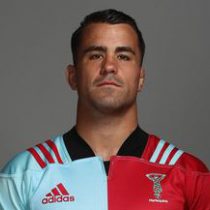 The tough hooker has played for England at Under-18 and U21 levels, but has since move around a lot. He has had spells with Bath, Northampton Saints, Sale Sharks and Cornish Pirates before joining Harlequins for the 2012/13 season.

Ward has added depth to Quins as a quality man to have in the middle of the front row. Ward's style of play is seen to be the right fit for Quins.

His Premiership breakthrough came in 2013–14 at the age of 28 where, following injuries to regular hookers Joe Gray and Rob Buchanan, he made 31 appearances, including his first Premiership start for seven years.

Over the course of the campaign, he earned five Man of the Match awards and was voted the Players' Player of the Season. At the end of the 2018/19 season ward had made 168 Harlequins appearances and scored 11 tries.

Ward joined Ampthill as player-coach in the summer of 2019 before leaving the side in 2021 for a head coach role at Bristol Bears Women.